The sound produced by the voluntary contraction of the tensor tympani was first recorded in the 1842 text Elements of Physiology Volume 2 by Johannes Müller.

Earlier this year, Italian engineer Massimo tweeted this diagram along with an explanation of the tensor tympani, bringing the internet’s attention to the fact that there is a divide between people who can and cannot flex this little-known muscle. Many reported not knowing the other side exists. That is, people who can flex this muscle didn’t know others couldn’t, and those who can’t did not know about the phenomenon at all. 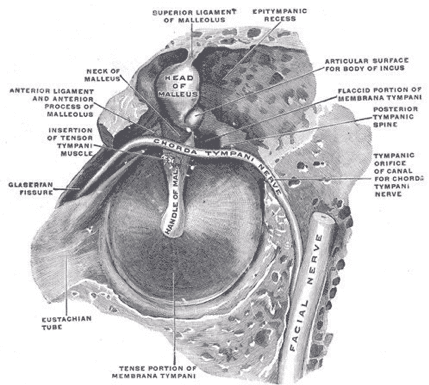 What Does the Tensor Tympani Do?

This muscle has an important role in the hearing process. When you hear a sound, your eardrum (or tympanic membrane) vibrates as the soundwaves hit it. From the eardrum, the vibrations are transferred to a series of bones in the inner ear known as the malleus, incus and stapes.

When the eardrum is tensed, its ability to vibrate is limited, which softens vibrations caused by soundwaves. This occurs reflexively in response to dangerously loud sounds, protecting the sensitive cells in the inner ear.

The tensor tympani has other roles, too. It can mask low-frequency sounds, which helps us hear high-frequency sounds better, and it contracts in response to sounds like chewing, coughing, speaking and yawning to muffle them.

So What Sound Are People Hearing?

While most people’s tensor tympani flexes only during the events described above, there are some people who can flex it intentionally. The sound is of the muscle itself. Being able to do this is like putting your hands over your ears (which is why some people report that the sound is similar to holding up a seashell to your ear) without actually moving.

For more information about the anatomy of the ear or to schedule an appointment with an audiologist, contact Topeka ENT!

Learn More About The Ear