October is Audiology Awareness Month, which makes it a great time to celebrate one of the most important inventions in the history of audiological care: hearing aids. 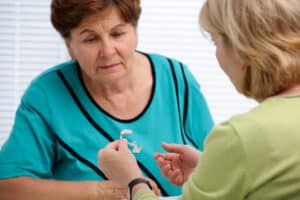 The Benefits of Modern Hearing Aids

Modern hearing aids are small enough to be practically invisible while offering advanced technology and can be worn by people of all ages, including infants. They do far more than just amplify sounds. Hearing aids today have:

Data from 2019 indicated that 7.1% of adults 45 and older used a hearing aid to treat their hearing loss. However, millions who would benefit from using them still don’t. If you are concerned about your hearing, don’t delay. Call Topeka ENT and make an appointment for a hearing test today.