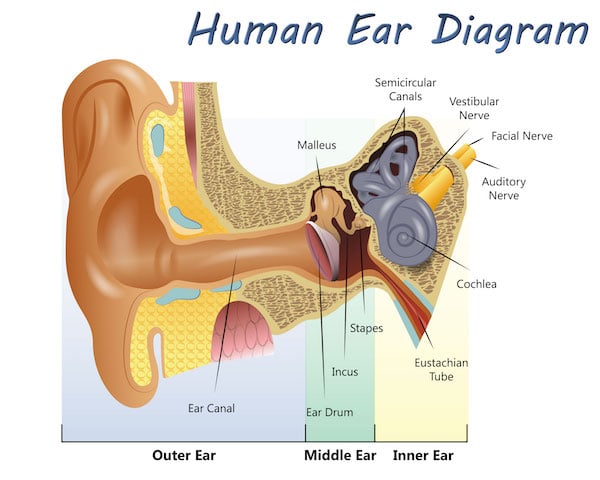 The peripheral hearing system is comprised of the outer ear, middle ear and inner ear.

The outer ear includes the pinna (also called the auricle), the part you can see, which funnels soundwaves into the ear canal. At the bottom of the ear canal is the tympanic membrane (eardrum), which vibrates in response to sound.

The middle ear is a small air pocket behind the eardrum that hold the ossicles, which are three tiny bones. The bones are called the malleus, incus and stapes. The malleus is connected to the eardrum, and the stapes (the smallest bone in the body) connects to the inner ear. The three ossicles work together to translate soundwaves to the inner ear.

The inner ear is responsible for both hearing and balance. The cochlea is the part that helps you hear; it contains fluid called the endolymph, which moves in response to sound vibrations, as well as thousands of tiny hair cells called stereocilia, which convert soundwaves to electrical energy that can be interpreted by the brain as sound.

The inner ear also contains the semicircular canals, which help you balance. They are also filled with endolymph that moves in response to head movements, as well as stereocilia, which work as motion sensors to help you orient your body in space.

The central hearing system consists of the auditory nerve, or the pathway for electrical sound energy from the cochlea to the brain, and the auditory cortex, which is the part of the brain responsible for making meaning of the auditory input.

If you have damage to the inner ear, which is common after exposure to excessively loud noise, you have sensorineural hearing loss. This type of hearing loss is irreversible and can be managed by hearing aids or a cochlear implant.